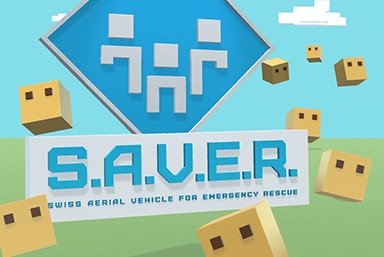 Challenge: Create a game inspired by a Commodore game (Cosmic Ark, 1982) and take it into a 3D game. It also had to focus on a political topic.

CONCEPT
I wanted to create a political game that throws the player into a situation without telling him what to do.
Because there is no guidance and only a basic mechanic explenation, the player is free to interact with the world as he pleases.
You are steering a drone that can move in a certain radius over the map. The drone is equipped with a tractor beam, which can pick up and release refugees at any place you can move to.

In this next step, I rely to the player.
Surrounded by fleeing refugees, the player can now start his interaction with the refugees.
I want to provoke an interaction that represents the political views of the player. Those actions are tracked in the background and are used to generate the next level, which will be a more extreme version of the playstyle of the current player.

I designed different options on how to interact with a fleeing refugee.

Helping
Pick up refugees and release them over a safe spot.

Observe
Each refugee has a lifespan and a goal for his travels. They also can’t cross waters and will drown if they are not rescued. By observing you can see which refugees are in need for help.

Murder
By knowing that the refugees can’t swim, you can actively murder them by dropping them into the sea.